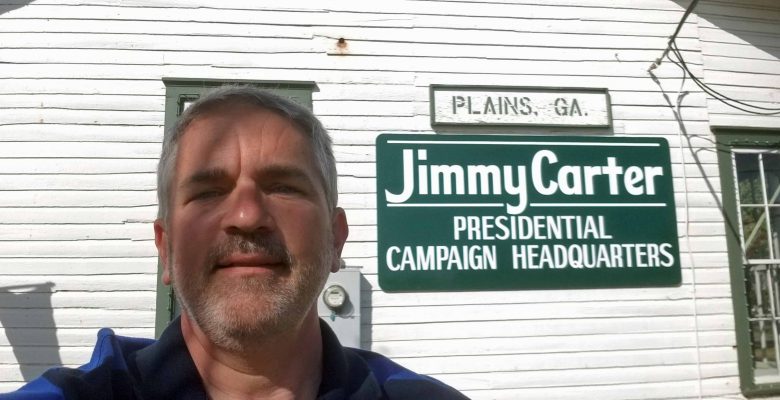 It was a small unknown town before, and a small albeit famous town after. The little community of Plains, Georgia witnessed one of its citizens, James Earl Carter, Jr. become Senator, Governor and the 39th President of the United States.

Through the entire journey, Jimmy Carter maintained close ties with his hometown. In fact, after four years in the White House, President and Rosalynn Carter returned to the only home they ever owned. The house they purchased in Plains, Georgia in 1961.

The Jimmy Carter National Historic Site begins at the Plains School that both Jimmy and Rosalynn attended. It has now been restored and one of the classrooms if furnished as it was when Jimmy Carter attended. The remainder of the historic school has been converted into a museum.

On the other side of town is the 360-acre farm where Jimmy Carter was raised. He lived on this farm until he left for college. The house has been restored and frozen in time. You can stroll through the house and see Jimmy’s bedroom and the luxurious indoor plumbing with nail hols in the bottom of bucket serving as the shower.

I have one life and one chance to make it count for something… My faith demands that I do whatever I can, wherever I am, whenever I can, for as long as I can with whatever I have to try to make a difference.

On the way into town is an innocuous white house with a non-descript brick ranch sitting behind it. The Secret Service now occupies the small white house and the Carters still live in their original house that they always returned home to after living in the Georgia Governors Mansion and the White House. Of course, now the area around the house is a well secured compound and not open to visitors.

The Plains Depot is downtown along the railroad tracks, as it once served at the train depot. This small wood building would later be the campaign headquarters for Carter’s presidential campaign.

Less than a block away from the Depot is the service station owned by Jimmy’s brother, Billy Carter from 1972 to 1984. This was a busy gas station during Jimmy’s campaign. Members of the press found it a convenient place to linger between campaign news stories.

Amazingly, the character of Plains remains as you would expect to find any small rural Georgia town. Aside from a few brown National Park signs identifying the The Jimmy Carter National Historic Site, you could easily drive right through town and not even realize the significance of this little community.