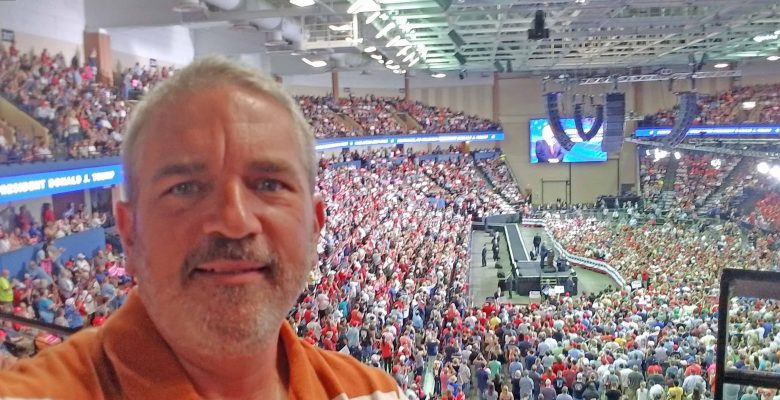 After several weeks in Kentucky, I skipped right through western Tennessee and stopped in northern Mississippi. Following my quest to meet up with as many old friends as possible, I landed in familiar territory. I will definitely make time for Tennessee on another day.

I enjoy new experiences, learning and being exposed to things both familiar and unfamiliar. This includes pushing my comfort zone occasionally and being exposed to new ideas, new people and new thoughts. During the recent presidential campaign, I had attended a Bernie Sanders rally at Rupp Arena in Lexington, KY. Nearly thirty years ago, I attended a Get Out the Vote rally featuring Jesse Jackson at Hara Arena in Dayton, Ohio. So, when I discovered President Donald Trump was holding a rally in northern Mississippi, it presented a great opportunity to see yet a new perspective.

Me and about 13,000 others queued in blistering heat to pass through security checkpoints and wait patiently in the arena for the presidential motorcade to make its arrival. Several local politicians spoke and then President Trump made one of his classic appearances. It was certainly a unique and memorable experience.

“We were that which others did not want to be, We went where others feared to go, and did what others failed to do. We were … American Soldiers.”

I called Mississippi home for ten years, and heat and humidity aside, it has been a pleasurable visit. Most notably, I have been able to spend time with friends.

The trip through the Mississippi delta presented miles and miles of cotton fields in the process of being picked as I traveled highway 61 from Tunica to Vicksburg.

With Hurricane Michael bearing down on the Gulf Coast, I decided to hover in central Mississippi and wait for the weather to clear before making my way further south.