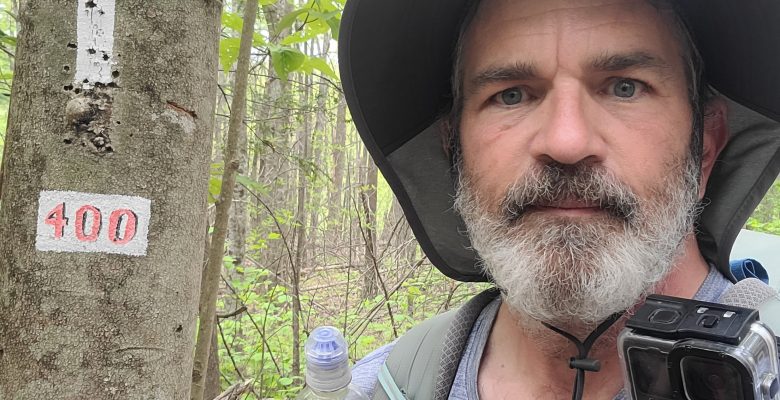 As I hike into Damascus, Virginia, the recent milestones are encouraging. I’m 470 miles into my Appalachian Trail thru-hike, and just crossed into Virginia. Finally seems like I am making some progress.

That means I have completed Georgia, North Carolina and Tennessee – 3 of the 14 states that the Appalachian Trail passes through are now in my rear view mirror.

And I just completed my longest day – hiked 18.5 miles into Damascus.  The lure of town food and a bed to sleep in was motivating!

I feel like I finally have my “trail legs”, and the slow and steady miles in the beginning has paid dividends as my strength and endurance continue to gradually increase.

Strength does not come from physical capacity. It comes from an indomitable will.

As expected, I’ve worn out my first pair of hiking shoes with 470 trail miles plus probably another 100 miles or so on them before starting the AT.

Fortunately the supplier in Damascus had the same Ultra Lone Peaks trail runners, as well as the Superfeet insoles. I will be hiking out of Damascus, Virginia with new shoes and should be set for another four to five hundred miles.

New shoes, a full resupply of food, gear cleaned and dried, laundry done, and a shower. Life is simple on the trail.

However simplistic, both the mental and physical challenges are real. I have discovered just how demoralizing rain and cold can be.

I have also had the benefits of a great support network reinforced. The thought of quitting briefly crossed my mind as a cold rain that began overnight continued into the day.

I pushed on and the Appalachian Trail happened to cross a road. I succumbed to the call of town, and after several tries was able to summon a shuttle driver to take me to a hotel in Erwin, Tennessee.

I dried clothes and gear in the hotel room and took a hot shower to warm up. A couple of encouraging phone calls later, any lingering thoughts of leaving the trail quickly disminished.

Merely by coincidence my daughter was leaving on a trip and was within driving distance, so she stopped by the hotel I had temporarily escaped to and further renewed my spirit. She also dropped me back off at the trail so I could push on.

I’m grateful for the encouragement and confidence, especially from my kids, but also from everyone offering kind words and helpful deeds over the last couple months.

This endeavor is infinitely more challenging than I had anticipated.  As my progress feels more tangible, I will be hike out of Damascus rejuvenated.

The approximate halfway point is Harper’s Ferry,  West Virginia and I am setting a goal to be there by July 4th, which will position me well for the second half of the trail.

Since no one will let me quit, I guess I am headed to Mount Katahdin in Maine! At the very least, I will give it my absolute best effort as I continue to push north on the Appalachian Trail.