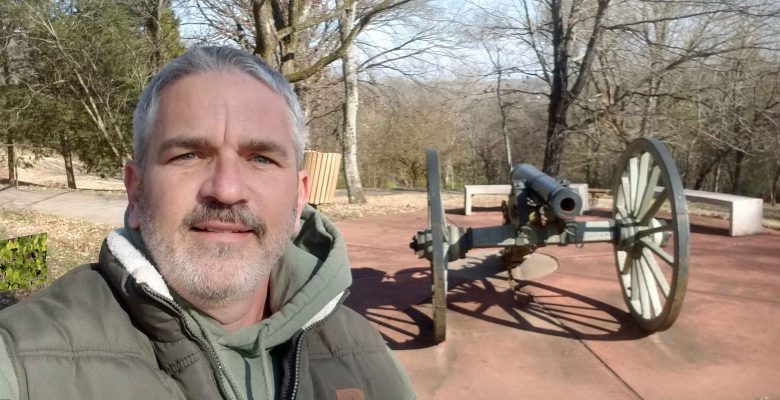 Finding little tidbits of hidden history off the beaten path provides a sense of exploration and discovery, especially when they are not well known and rarely visited. As I wandered from southwestern Kentucky into Tennessee, I discovered two interesting pieces of history related to the Civil War.

“A battle lost or won is easily described, understood, and appreciated, but the moral growth of a great nation requires reflection, as well as observation, to appreciate it.” — Frederick Douglass, former slave and abolitionist

The first was in Todd County, Kentucky, nestled among a few rural houses and tobacco fields.

There stands a 351-foot obelisk monument. Constructed in the same obelisk architecture as the Washington Monument, which stands just 200 feet taller than the cement and sandstone structure rising unexpectedly from the Kentucky landscape.

The monument stands on the birthplace of Jefferson Davis, and was privately funded and constructed before being acquired by the Commonwealth of Kentucky as the Jefferson Davis State Historic Site. There is an elevator that operates during the summer months rising up the middle of the monument to observation windows with a view of the Kentucky countryside.

For clarity, I am certainly not celebrating or endorsing in any way Jefferson Davis and his ideology, but rather recognizing an unfortunate period of history in our country and appreciating the strides we have made as well as the learnings to ensure we do not repeat the horrible things of the past and continue to make progress in a positive direction.

“I leave you, hoping that the lamp of liberty will burn in your bosoms until there shall no longer be a doubt that all men are created free and equal.” — Abraham Lincoln, July 10, 1858, Speech at Chicago, Illinois

The second find was less than an hour away and across the border in Clarksville, Tennessee. Not familar with Clarksville, I was expecting a sleepy little town to fuel up and spend the night. Wow!

I was so wrong. I quickly learned that Clarksville is home to Fort Campbell Military Base and the 101st Airborne Division. Then there is Austin Peay State University commanding the hilltop of the city. Clarksville embraces the Cumberland River, which serves as a foundation for many outdoor activities.

I need several days to explore this area, but with only a limited amount of time I selected a fairly small and hidden city park. And this was not the typical

In a nutshell, this was an earthen fort built high above the Cumberland River to help the Confederacy protect the critical river route. No significant battles were fought on this soil and the area was abandoned when nearby Fort Donelson was captured and there was no confidence they could stop the Union advance.

I found an interesting connection with the U.S.S. Cairo display in the museum – an ironclad warship designed for traversing the rivers during the Civil War and repelling enemy attacks from the shoreline forts. The U.S.S. Cairo passed below Fort Defiance and proceeded along the Cumberland River and eventually south into

the Yazoo River where it was sunk just seven miles above Vicksburg, MS.

The connection – In 1966 the U.S.S. Cairo was raised from the muddy Yazoo River bottom and soon after the entire vessel was added as a display and and adjacent museum constructed in Vicksburg National Military Park – where I worked for a couple years as a National Park Ranger back in the 1990’s.

Two interesting and fairly unknown Civil War gems – a 351-foot obelisk monument in Kentucky and an earthen fort where the ironclad U.S.S. Cairo passed below on the Cumberland River. There are so many fascinating opportunities to learn and experience in unexpected areas.