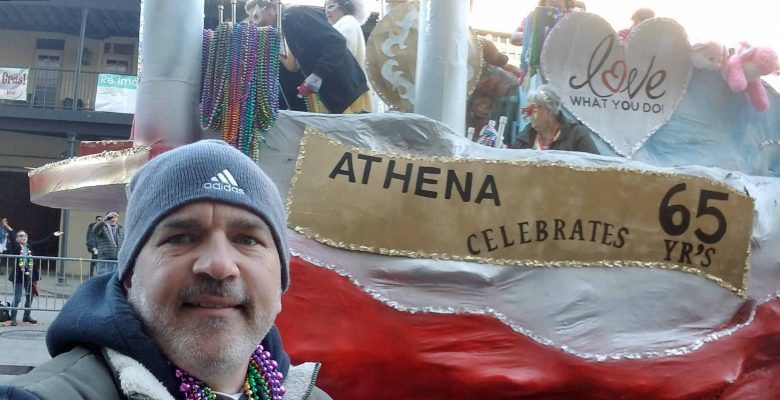 It was a cold and breezy start to Fat Tuesday in the city where the Mardi Gras parades started – Mobile, Alabama. The long history of celebrating in Mobile dates back all the way to 1703. Locals here in Mobile are quick and proud to clarify this was fifteen years before New Orleans became a city.

It is not just one parade – this is a month-long Mardi Gras season! The first parade in Mobile was on February 2nd and continued all the way through the six parades that take place on Mardi Gras Day – Tuesday, March 5th.

Mardi Gras is more than just a celebration, it is a part of the culture. Mobile schools are closed for the week of Mardi Gras, and many businesses treat Fat Tuesday as a Holiday and close. There was never a question that even the Habitat for Humanity build would be on hiatus for Fat Tuesday in Mobile.

The parades are an eclectic combination of extravagant floats, high school marching bands and various musicians. The parades have become known for “throws” since the tradition of tossing little trinkets to the crowds started in 1870.

I easily snagged more beads than I will ever need! The unique throws were quite intriguing. Moon Pies were first tossed in 1956 and have now become a staple. The little Minees cookies are also popular. But there were also balls, footballs, little toys, stuffed animals and all sorts of other sundries that were liberally thrown in large quantities to the huge crowds gathered along both sides of the parade route.

Fortunately the sun was out and the skies clear and the temperatures warmed through the day making for a quite pleasant day of watching the craziness. People swarmed about downtown Mobile, Alabama creating an atmosphere similar to tailgating for football games. Some people brought tents, chairs and grills and cordoned off a little piece of the sidewalk for their own party.

RV City was fun to see. Just like tailgating, there is a designated area where a bunch of RV’s are parked for the month long Mardi Gras celebrations.

I was impressed with the scope of preparedness of some parade watchers. People trekked in from their cars carrying fishing nets to catch throws in mid-air, rakes to extend their reach into the street to recover beads and toys that had fallen unclaimed and many brought large bags to easily tote their haul.

It was a fun day celebrating Mardis Gras in Mobile, Alabama!