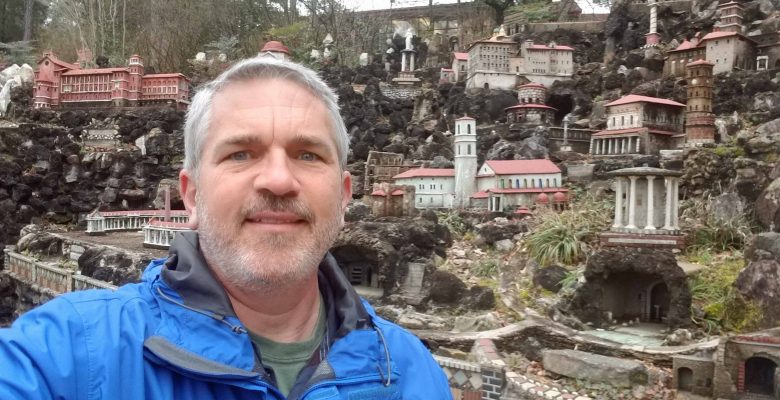 While it is interesting to see roadside oddities, I am equally intrigued by the personal stories behind these pursuits of passion. The Ave Maria Grotto at the St. Bernard Abbey in Cullman, Alabama is quite an amazing sight with an equally interesting story.

The collection of 125 miniature replicas of buildings from around the world were imagined, designed and constructed by Brother Joseph Zoetl, a Benedictine monk of St. Bernard Abbey for almost 70 years. These structures are just a few feet tall and are scattered about a 4 acre hillside. This is just a small portion of the peaceful setting of the Abbey.

A young man from Bavaria came to the newly founded St. Bernard Abbey in Alabama in 1892. Brother Joseph contributed to the operation of the Abbey by spending his days shoveling coal into the furnaces to generate electricity and the remainder of his time was occupied with prayer.

Based on his study of history and the bible, Brother Joseph’s creativity could not be contained. He gathered some unwanted materials, such as stones, broken plates, tiles, and beads. Scraps that he then meticulously crafted into little buildings bringing his imagination to life.

These structures that emerged were essentially accurate representations of the actual places such as the Basilica of Our Lady of Guadalupe, the Montserrat Abbey, St. Peter’s Basilica, Monte Cassino Abbey among many others.

Amazingly, Brother Joseph had only visited six of the over 100 buildings he constructed from 1912 to 1958. The remainder were designed and subsequently built from photos and the written descriptions of others. The resulting detail and intricacies bring these tiny structures to life.

Do not go where the path may lead; go instead where there is no path and leave a trail.

Brother Joseph’s humble passion left a legacy that still attracts visitors to the St. Bernard Abbey over fifty years after his death.

Although there were no live oak trees, no pathways lined with azalea plants and no swinging benches, there was certainly a serene atmosphere on the grounds of the St. Bernard Abbey. The tranquility is contagious and provides a great escape to reflect and recharge. The work of one man.