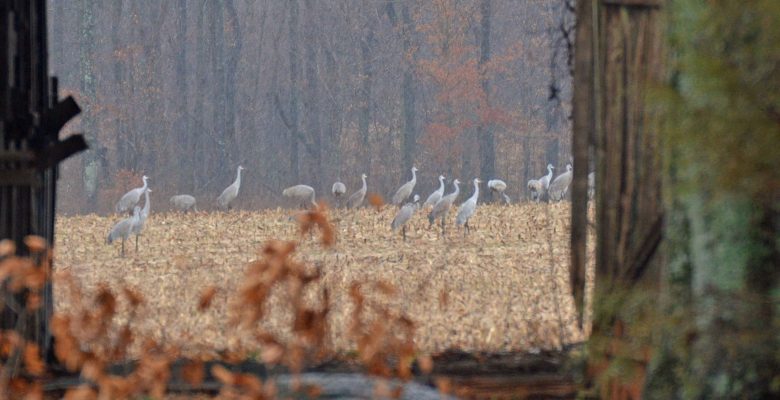 The Sandhill crane migration lands the birds at Barren River Lake in south central Kentucky where they spend the winter.

The soft touch of the three long toes delicately balance on the soft and soggy mud in the shallow water. The body extends four feet tall and supports a five foot wingspan. The telltale red foreheads contrast with the gray bodies of the Sandhill cranes.

Their light weight enables efficient soaring to find food and roosting on the soft mud flats to rest at night. They travel together by day foraging the nearby fields for food and then the hundreds and even thousands of Sandhill cranes roost together at night relying on the mud flats to protect them.

Mud that quickly engulfs the paws of an approaching coyote, bogs down the powerful predator pounding towards its prey. The mud flats provide a barrier protecting the Sandhill cranes from attack. As added security, a few cranes are always awake and on full alert ready to warn others of impending danger. Just as the leader periodically rotates when migrating in the common “V” formation, the duty of the watchful sentinels rotates among the birds through the night.

Barren River Lake State Resort Park in south central Kentucky serves as the winter home for about 3,000 Sandhill cranes. As a man-made lake, the lower water level maintained in the winter typically provides ideal mud flats for the cranes. Coupled with all the surrounding corn fields for daytime feeding, Barren River Lake is ideal habitat.

A heart without dreams is like a bird without feathers.

I was fascinated to learn an interesting tidbit about Barren River, specifically the origin of the name. Native Americans burned large expanses of forest in this area of south central Kentucky. The Native Americans discovered that with the trees and brush burned, lush grasses would flourish and attract buffalo.

This early land and wildlife management ensured the buffalo, critical to the survival of the Native Americans would remain plentiful and in a predictable location in close proximity. When early European explorers arrived and saw the land with no trees, they incorrectly assumed the soil was not fertile and referred to the area as the barren land.

The Sandhill crane migration of thousands of birds occurs every November to Barren River Lake and the surrounding area. The cranes have adapted well to the cold and most only fly south to Iowa. Kentucky is as far south as any Sandhill cranes migrate before beginning the trek back to Minnesota and Canada in February.

Wildlife is predictably unpredictable. Although seeing about a thousand Sandhill cranes proved to be a fun experience, the picturesque view of thousands of migrating birds chattering loudly and flying in to roost never really developed.

I enjoyed the adventure and will seek another opportunity to see the iconic Sandhill Crane migration.

Here’s a link to my last post: A frosty night and a red hot moon! A clear crisp night sky awaited the lunar eclipse.

If you are new to RVing Revealed…
Who’s Brad? About the Author – Brad Saum

Parental bragging rights – College indoor track season is in full swing and my son is currently ranked first in the Mid-South Conference in the 60M hurdles! I posted two videos from last week’s meet in Indiana: Heat 2 and Finals.