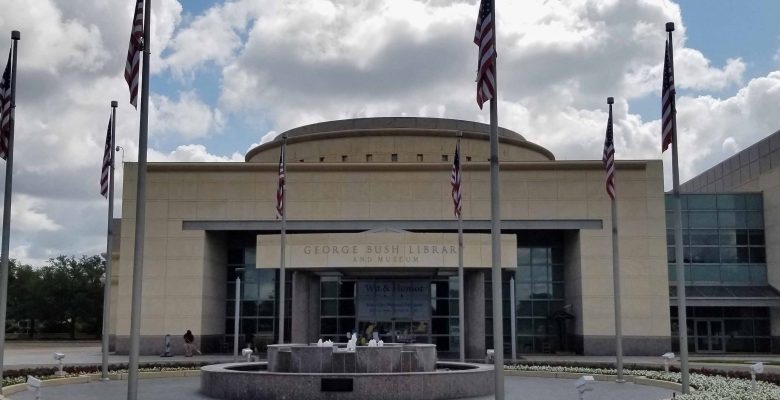 As a side note, I am sharing this a week or two after my visit to College Station, and I am no longer in Texas. More to come as I get caught up on editing and continue to share my travel experiences as I live and travel full-time in my RV.

Each day we should do something to help others.

Located on the campus of Texas A&M University, the George H.W. Bush Presidential Library is impressive and nearly overwhelming with information.

I found the details interesting of when President George H.W. Bush, then a World War II fighter pilot, was shot down over the Pacific Ocean. Imagine the look in his eyes as he was floating precariously in dangerous waters likely facing death, when suddenly a 311-foot submarine crashed through the surface of the ocean. As the future commander in chief was being rescued, a sailor just happened to snap a photo that captured the scene.

Any definition of a successful life must include serving others.

Bush 41 enjoyed his 28-foot Cigarette boat named Fidelity, which was designed for off-shore powerboat racing on the open sea and equipped with twin 185hp MerCruise motors. The boat is now on display in the George H.W. Bush Presidential Library and Museum.

As President, Bush 41 would take visiting dignitaries out for a ride. There is a great photo of President Bush at the helm with his hair blowing as he raced across the ocean. In the photo, immediately behind Fidelity was a U.S. Coast Guard ship providing security and likely wincing at Bush 41 playing with his toy.

A quiet walkway along the edge of a pond leads to a bridge across a small creek. A short and serene path leads the the final resting place of President and Mrs. George H.W. Bush along with their daughter Pauline Robinson Bush, who died when she was just 3-years-old in 1949.

Join me on social media!