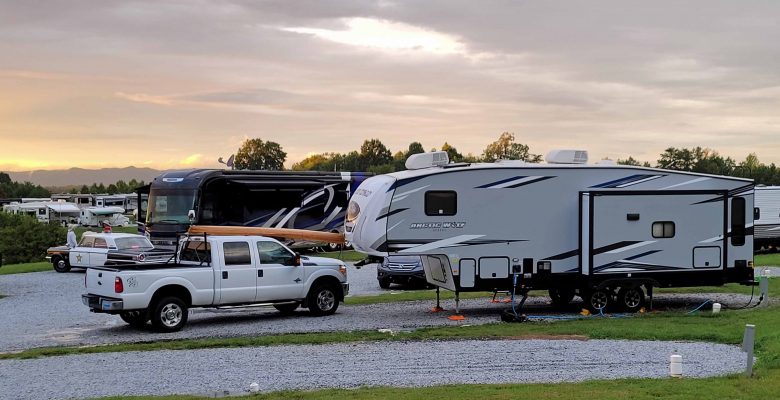 I rolled into the North Carolina State Fair Campground in Raleigh, and it became apparent that something was just not what it seemed.

With several hundred campsites primarily used only during the state fair, I have found fairgrounds offer a no frills, full hook-up, reasonably priced and centrally located home-base to explore a city. I occasionally enjoy the change of pace to complement rural camping. The campground is closed to the public in October to serve its role as a component of the State Fair providing space for carnival operators and vendors.

As I proceeded down the gravel entry to the RV sites, I immediately noticed it was nearly full of RV’s. I found one of the few remaining open sites and called the phone number to register, and all was good. I spoke to the people in the adjacent site, and asked out of curiosity if this number of RVs was typical.

To my surprise, I was in the middle of the tailgate area for the North Carolina State vs. Clemson football game! I could see the stadium from my RV, as it was easily in walking distance. Friday night and into Saturday morning, everyone had their fan gear setup typical of tailgating.

Oh yes, not to mention they upset Clemson in overtime! Definitely some celebrating in the RV park.

A week prior, as a I left Roanoke, Virginia and crossed into North Carolina, I stopped at the Welcome Center and was urged to visit Mt. Airy, North Carolina. I obliged and found the Mayberry Campground where I was told I got the last site available.

A vibrant little community, Mt. Airy was not only the home of Andy Griffith for forty years, but also the basis for Mayberry, as the city in The Andy Griffith Show. The city of Mt. Airy was adopted the persona of Mayberry, complete with an operating Floyds Barber Shop, a complete likeness of the Sheriff’s Office, and 1960-era police cars providing guided tours regularly blaring their sirens to garner attention.

Mayberry was exceedingly active, even for a tourist town. That too was not entirely what it seemed. Mayberry Days was fast approaching, and serious Andy Griffith fans and enthusiasts of The Andy Griffith Show were milling about, living momentarily in 1960’s Mayberry.

Mt. Airy, North Carolina was a fun encounter as I left Roanoke, Virginia. Roanoke had been a pleasant compromise as I was reluctantly leaving the Appalachian Mountains and dropping into the piedmont region.

McAfee Knob and all of the Appalachians were visible from atop Mill Mountain. The mountains spilled into Roanoke Valley making for spectacular views. Mill Mountain is home of the largest man-made star in the world standing brightly over the city of Roanoke.

Back in the Raleigh area, besides enjoying the NC State win, I ventured out to do some hiking at William Umstead State Park. The 5.8 mile Company Mill Trail was a good hike and much easier without all the ups and downs of the mountains.

“The only real stumbling block is fear of failure. In cooking, you’ve got to have a what-the-hell attitude.”

I also discovered my first kayak trail. Robertson Millpond Preserve in Raleigh has a trail through the water marked with buoys. I meandered around cypress trees through the black water swamp. I was grateful for the buoys to identify a path through the cypress trees.

My time in the Raleigh area concluded with a visit to Falls Lake in Wake Forest. I’m staying in North Carolina, just moving a little west to check out Winston-Salem.