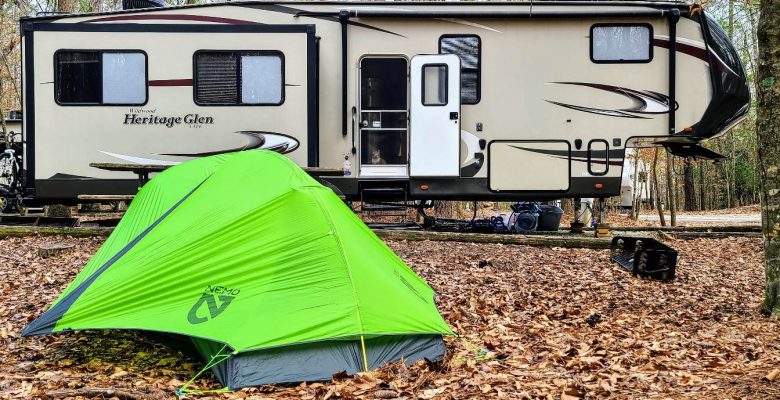 A warm and sunny day was just what I needed for an RV repair to keep my primary home maintained as well as spending some time learning how to setup my new temporary Nemo Hornet tent home.

I am fairly well equipped with a heated water hose as well as a couple heat strips and foam insulation for exposed pipes. I have managed well as I dipped in and out of the winter weather over the last couple years. Unfortunately, while I was escaping the frigid winter temperatures of Ohio, one of my gray water drain pipes froze and burst.

Although I had drained the tank, apparently as I was traveling some remaining water made its way into the drain pipe where the valve extends below the enclosed underbelly. I was driving in temperatures around 15 degrees and the pipe burst. Not a big inconvenience, since I was able to tape it up and salvaged some use out of it until I could reach warmer weather.

Some RV antifreeze designed for water pipes would have prevented the problem, but I have never had issues previously while driving with the tanks drained. An ounce of prevention is now on my checklist when driving in freezing temperatures.

As I prepare for thru-hiking the 2,200 mile Appalachian Trail, it was time to practice setting up my tent this Nemo Hornet 2P tent will be my home away from my RV as I leave my RV behind and backpack from Georgia to Maine.

It was not exactly intuitive but with the help of a YouTube video and the instructions, I was able to setup my new Nemo Hornet 2P tent. I will definitely be practicing and perfecting my skills over the next couple weeks.

I have several new pieces of gear that I will be unboxing and increasing my familiarity with before hitting the trail. There’s no way I will master all the skills before I leave, but practicing some of the basics may help smooth the transition from RVing to backpacking. Regardless, I’ll have 2,200 miles to perfect my skills and learn new techniques.

I am immersed in planning and coordinating details for my Appalachian Trail adventure. I will be starting Saturday, March20th on the Approach Trail at Amicalola Falls State Park in Georgia.

It is not the critic who counts…The credit belongs to the man who is actually in the arena, whose face is marred by dust and sweat and blood; who strives valiantly; who errs, who comes short again and again, because there is no effort without error and shortcoming; but who does actually strive to do the deeds; who knows great enthusiasm, the great devotions; who spends himself in a worthy cause; who at the best knows in the end the triumph of high achievement, and who at the worst, if he fails, at least fails daring greatly, so that his place shall never be with those cold and timid souls who neither know victory nor defeat.